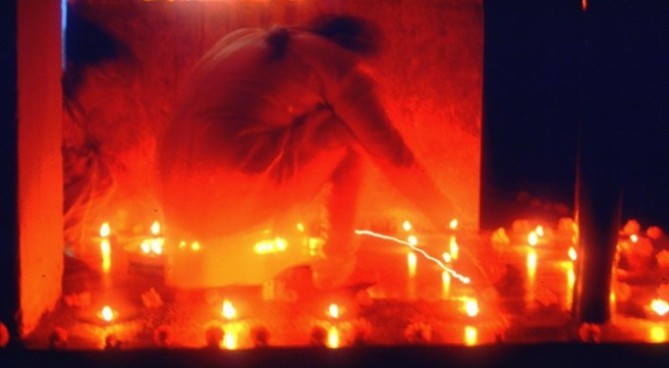 ~ “Call me a pregnant woman”

Many African-American midwives in rural southeastern US of the 20th-century were proud that they could “plow like men, and pick cotton by moonlight.” They said they were uneducated but that midwifery put their “big minds” to work. (pg. 63, Listen to Me Good, Margaret Charles Smith and Linda Holmes.)

All three of us Open Dharma facilitators—Gemma, Ajay, and I—are fascinated that many meditation traditions talk about spiritual deepening as pregnancy and giving birth to one’s potential, to life, or to enlightenment. Teaching is like midwifery. The idea of being reborn (Christianity) or twice-born (Hinduism) passes almost without notice. But some teachings refer to female fertility more graphically.
Gautama Buddha, Sahajobai, St. John of the Cross, Hafiz, Lao Tzu, and Valmiki in the Sanskrit text called Yoga Vashisht.

Gautama Buddha said that his transformative insight was born from “yoniso manasikara,” taking the mind and investigations into the “yoni,” another word for vagina or womb. Is the Buddha’s “yoni” an inner “space” where we can drop and rest our minds, to let another lively process take over? Are we to think of receptivity, or passage, or power; surrender, mystery, creativity, pleasure, openness, aliveness, patience, and gestation?

In one poem by the Persian poet Hafiz, he is annoyed that his revered facilitator keeps calling him a pregnant woman.
Why did Hafiz, himself a father, take the name as an insult?

Why would sages like Buddha and Hafiz use this specific language?
And why are we shocked by female sexual metaphors for spirituality?

In physical pregnancy, hormones increase a woman’s blood volume by up to 200%, soften muscles and ligaments, raise heart and lung capacity by about a third, and make the womb into the largest organ in the body (500 to 1000 times its original size) by the end of 9 months.

Also a process-state of softening, power, and expansiveness, spiritual pregnancy may be rarer, longer, with even more upheaval, more softness and power, and more deep life changes than physical pregnancy.
Both spiritual and physical pregnancies are mysteries we have many views about: overpowering, beautiful, repulsive, simple, exalted, strange, primal, essential, intimate, impersonal. (I would not be surprised if Christopherji gets a lot of agitated responses to this essay.)

Another question: In India, disciples revere the Buddha and other sages with the title "Bhagwan," yet the word literally means “He who has a vagina.” (The female form is “Bhagwati.”) What kind of vagina do illuminated people have?
And why do we translate this name “Bhagwan” as "Blessed one," “Sage,” or “God?”

Perhaps this euphemistic translation reveals a short circuit in our thinking about human spirituality. Are we avoiding an earthiness and mystery of spiritual life? Are we afraid to “be in a body” to realize (make real) our spiritual potential?

While Buddha generously and wisely gave great spiritual support to “laypeople,” some of whom became enlightened, his religion also institutionalized monasticism (as opposed to “lay” life) as the measure of spiritual commitment. Monasticism also converged with culture to say monks first, then nuns, then laypeople. Putting spiritual above “worldly” commitments and monks over nuns almost gives the impression that spirituality is masculine while the world of family and relationships belongs to women.

We may assume that this order has always been in place, but in ancient India and other deeply spiritual cultures, female and male sages often had partners and children.

But over many centuries we have followed Buddhism’s lead. Even today, people who want freedom often assume they have to leave home, leave family, leave sexuality—leave the human bonds that tie us to this dusty world.

In some spiritual circles, having children is, at best, something we should do after we have perfected ourselves. Maybe children are a costly indulgence in a “natural urge.” At worst, we may catch ourselves thinking of children as a burden on an overpopulated earth and a distraction from the spiritual path.

One consequence: people with sensitivity and passion for awakening often leave the childrearing to others.
And sometimes over the centuries people have been left without creative spiritual leadership.


What kind of lead do we want future generations to follow?

In the last few generations, we humans have led ourselves into a disaster for the planet and the human heart. Only the dedication of more than one generation will build a lasting momentum towards harmony and liberation.
Where is the leading edge in our practice and our lives?

Many friends report that, more than anything else, relationship tests and deepens their spiritual practice. Adult intimacy now gets some much-needed attention, but shall we also listen to the many long-term meditators who say children have taught them as much as did being on retreat or in a monastery?

Some friends who have children but don’t go on retreats were shocked when I mentioned the need to heal the gap between parenting and spirituality. “What gap?” they asked. For these friends, parenting is deeply spiritual both in its challenges—“you are no longer the center of the world”—and in its surprising richness—“so much love.” One friend with 2 daughters and a rich spiritual background says she is often tranquil amidst chaos, but that more importantly, she laughs at herself when she loses her balance. As Pema Chodron emphasizes in stories about being a grandparent, taking care of children may be one of the best ways to attain the “egolessness” of a sense of humor about ourselves.

Whether birthing and “raising” children or our spiritual potential, we need to establish new trails to follow. Not everyone has had good models of family life. I was surprised when someone recently described her experience of “unconditional love” as a mother-- not her own love for the child, but the child’s love for her “no matter what—thin, fat, short, or tall.” In retreat interviews, many people say they feel that as children they parented their parents. While some parents may unintentionally have children in order to get love, parenting seems to be one of the few areas that western culture still encourages us to give quantifiably more than we “get.”
The challenge and fruit of life, whether “spiritual” or “family” life, may be similar: to love and give oneself to life without calculating the cost and payback.

Obviously, not everyone wants to or does get literally pregnant. (At age 40, I am still waiting to feel that longing to be a parent that some friends express.) In decades of experience with families, therapist Bert Hellinger has found that adults or couples without children may need to give themselves to some other kind of creative cause. Moreover, the pain of miscarriage, abortion, or not being able to have children often needs attention as a deep spiritual matter. Addressing these feelings may lead us directly in, to the spiritual womb.

But sadly, many people in spiritual circles feel embarrassed even to admit such “worldly” feelings, including the calling to the profound challenge and enrichment of having children.

Maybe the strict division between “serious practice” and children has done our practice a serious disservice.

For the last 2 years, Gemmaji and I have shared our home in Lucknow, India, with a family of four, including 2 boys under the age of 3. At first, it was hard to give up our privacy and “freedoms.” We were used to resting and being alone at home between the intensive retreats we lead with Ajayji in India and around the world. Suddenly, two little human beings at home had one primary goal in life: to get into our space (going straight for the scissors, the flute, the laptop).

Gradually, we noticed that our love for those two little boys ripened and deepened our formal meditation practice. And life has room for both.

Other miracles: many “serious practitioners” walk into our home listless but forget their drama within minutes of playing peek-a-boo. Hanging out with the kids may be one of the best cures for some of the most common and deadly diseases of the spiritual path, such as perfectionism, rigidity, self-preoccupation, and other losses of perspective.

Although some serious meditators would be well served by painting with kids, people with children often struggle to find a place they can practice and be with sangha. Silence and children don’t always fit in one place, but habit and cultural prejudice often close doors to Dharma families unnecessarily. A few years ago, one woman had just decided to become a nun in Asia when she found out she was pregnant. Now a mother of a lovely child, she has been unwelcome in some ashrams and most retreats. Many retreats and centers follow cultural leads that favor those without “special needs” like child care. Many of us facilitators follow the drive to be so busy that we don’t have time to reevaluate forms of retreat and spiritual teachings.

Parents, especially of children with real special needs, could use help so that practical details don’t crowd their days and hearts. Because parents cannot entrust their kids to just anyone, sensitive and reliable friends in the sangha take on great importance. At the same time that we must value, train, and pay professional child-carers much more, informal care may help parents and non-parents understand what our Zen ancestor Dogen called “practice-realization.”

Bringing spiritual life and children together may reveal a 5th Brahma Vihara, or limitless resting place for all of us.
People without children in their lives may deepen in practice-enlightenment by spending a few hours a week playing with kids:
1) Dropping self-centered seriousness, and remembering spontaneity, joy, and wonder, the heart of spirituality;
2) Letting love stretch our capacity to be present, steady, and confident in the midst of life. Superficial ideas of freedom can give way to accepting creative participation in a world that needs us. (Necessity is the mother of invention, after all.)
3) Awakening a parent’s sense of alert responsibility about what kind of world we are welcoming children into.

Centuries ago in Japan, Dogen wrote about leadership, sangha, and expanding the heart’s capacity:
“The Chinese word for practice leader, weino, is based on a Sanskrit word meaning, ‘one who causes the community to rejoice,’... ‘the delight of the community.’ ... With compassion you care for those who arrive, and you nurture ... the community. You make the community’s heart your heart, and their thought of the Way your thought. You make parental heart your heart and the heart of children your heart. If you practice in this way you will be like a boat with a rudder on a wide river, or like rain in a time of drought.” (pp. 242-5, Enlightenment Unfolds, Dogen, tr. Kazuaki Tanahashi)

We certainly need to consider our own life as a whole, but also to go further, to “life as a whole,” including life beyond this generation. We can all remember the heart that cares beyond the immediate family, neighborhood, sangha, religion, or country. We can all humbly think of ourselves not only as spiritual descendents, following our facilitators and the wise ones of the past, but also as the only ancestors for future generations.

Perhaps superficial independence, convenience, and “freedom of choice” have magnetized many of us away from basic human fulfillment.
Perhaps we need the confidence to participate deeply in the secret of the Buddha’s yoni, allowing life mystery to take over our lives from the inside out, even if life sometimes turns inconvenient, demanding, and chaotic.

Since we at Open Dharma are encouraging others to move beyond the duality of enlightenment and parenting, I decided after 2 years of consideration to experience this non-duality firsthand. If all goes well, I will give birth to a son in November or December, 2007. (The private family details will, of course, remain a mystery.) Open Dharma will continue offering retreats and support, and we also sense that the teachings will get even richer during this “experiment.” For practical reasons, I need to stay in Spain for the birth, although I have a wonderful doctor, home, and community in India. Inconvenient for me, but let’s follow life’s lead wholeheartedly. 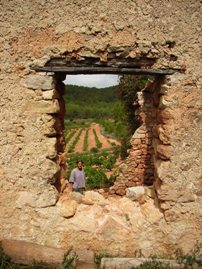 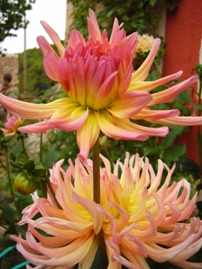 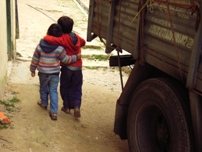